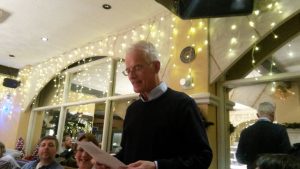 Dr Mark H Barley retired from the group at the end of November after a varied and interesting career spanning 34 years in both industry and academia.

After taking his Ph.D. in Chemistry at the University of British Columbia, followed by Post Doctoral research in North Carolina and Cambridge (UK) he joined the chemical company ICI as an electrochemist. After working on two short electrochemical projects he moved to a thermodynamics and physical chemistry role in support of the marketing and manufacture of ozone friendly refrigerants; followed by a period working on fragrances and flavours.

On leaving ICI in 2006 he obtained a Post-Doctoral position in the Centre for Atmospheric Science at Manchester University modeling the chemical composition of atmospheric aerosol; and then the position at the MIB studying Genetic Algorithms, where he was a very valuable and nice member of our group.

We wish Mark a very long and wonderful retirement.